It’s 2013 and I’m papering my bathroom the year after we had moved into our new home.

We spent 12 weeks preparing the house for our arrival, getting things done that would be trickier once we were in. I then spent the best part of a year building my own bathroom, for great pleasure and personal satisfaction as well as further developing my practical skills.

This was to be no ordinary bathroom.

Temperature and humidity results below. 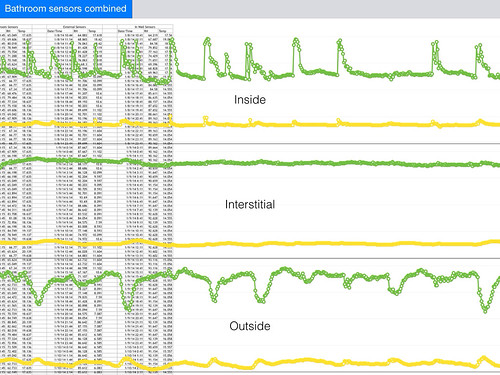 Green – Humidity
Yellow – Temperature
Interstitial – behind 50mm of Hemp and Lime, in front of 215mm late Victorian clay brick, at the top of a room, above a bath and shower. 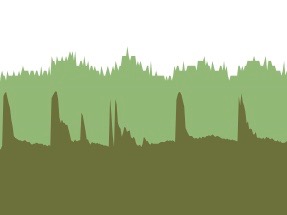 Data files are available on application.

Hemp and Lime creates a hygroscopic reservoir, buffering peaks in humidity and preventing damp. Moisture vapour doesn’t change state from gas to liquid, it’s captured without condensing. When the humidity lowers moisture is released as vapour without using energy to evaporate condensed liquid back into gas resulting in loss of energy. There is no vent, no condensation and no heat loss.

After removing the previous problematic bathroom it is much easier to achieve a true, level, flat surface by casting with Hemp and Lime, hempcrete.  Working at extremes of humidity and thickness it is essential the product has optimal performance. Tradical Hemcrete.

Behind the vapour impermeable ceramic tiles, rigid foam insulation board is sandwiched against the wall in layers to ensure no warm moist air can be sucked out through the wall causing interstitial condensation.

On the ceiling, Plywood I-beams are filled with over half a cubic metre of Hemp and Lime. Warm air holds more moisture and is more buoyant, it is carried to the ceiling.

The masonry walls are pegged out with ‘Dochans’ twisted timber pegs cut to rotate as they’re hammered in. This makes them tight along their entire length, unlike a wedge that with minimal shrinkage becomes loose.

The stud wall is filled with Hemp and Lime; this is easier than repairing the lathe and levelling with lime and adds a further third of a cubic metre of Hemp and Lime to the hygroscopic capacity.

Services can be concealed within the Hemp and Lime, no air movement through draughty service voids and no cold pipes to collect condensation.

The wall was easy to plaster, cast flat and having the open surface to accept the plaster. A fine fibreglass mesh is added to the base coat, this acts as a trowel guide, ensuring the surface remains flat and ready to receive the top coat.

Lime plaster has a longer work time,  which helps to achieve a smoother finish. It is so fine, trowel marks can be seamlessly filled and rubbed back with fine paper.

Casting a room to the desired dimensions, true, flat and level, makes everything fit.

European Oak polished with Danish oil is warm and hygroscopic. The build-up of oil acts a vapour control layer allowing moisture to pass both in and out at a controlled pace as and when appropriate. This prevents condensation which collects dust on the cold surfaces of service voids.

Sash windows are designed to let the moist air out the top and the fresh air in through the bottom. This is driven by the pressure difference between the top and bottom of the room, inside and outside. The door to the bathroom is draught-proofed with a push-in vinyl strip.

Linen wallpaper is very hygroscopic, reacting quickly to peaks of humidity and with Lime plaster and Hemp behind it will never peel off.

Plaster of Paris cornice from Hayles & Howe. Reinforced with hessian fibres, Jute, Sisal or Hemp, highly Hygroscopic. The cornice also breaks up the ‘eddy’ current, air trapped in the top corner and the ornamentation increases the surface area allowing it to capture and buffer more moisture vapour.

The Hygroscopic bathroom was build to test the principles of Hygroscopic capacity and velocity in an extreme and yet very real environment. The project has been so successful a hygroscopic en-suite shower room is being added to the guest bedroom.

Cold spots
Every home has Cold spots under repeated attacked from internal weather, reduce storms and tackling a more manageable project in isolation.

Understanding why works in the RMI sector may not deliver