Downstairs emancipation, an open plan kitchen has increased moisture. Upstair modernity, double glazing and loft insulation has made the walls relatively colder. Moisture is no longer dissipated, it’s condensed on the walls. The solution, people, closing doors, opening windows, hanging out laundry and rebuilding the wall to close the door on the kitchen. Removing vinyl paint and cement render exposes an un-even surface that needs putting straight on a budget. Gas fire isolation valves indicate a history of excessive moisture. Sometimes only the hole in the floor remains. Gas fire removed, central heatings installed and with hot water on tap a an internal Bathroom is added to the back bedroom. Heat is now piped into the room via ‘radiators’, convection heaters, great for drying laundry. 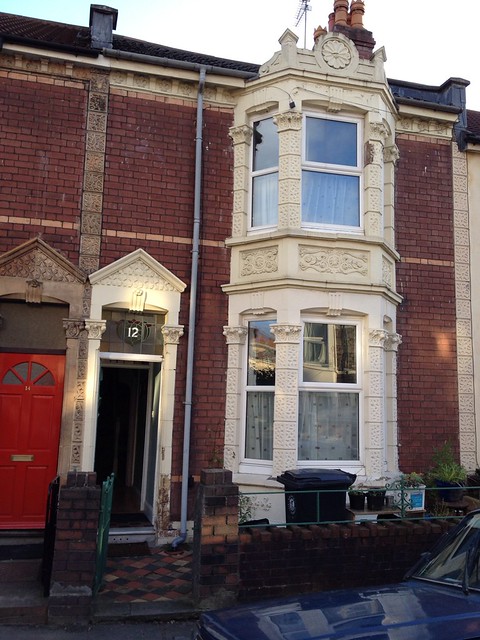 Built on a budget this late Victorian terraced house provided affordable housing for the local coal mining industry. When slave labour was abolished the price of coal went up and the unemployed miners ‘switch and saved’ to north sea gas which came bundled with free water. No longer did the radiant heat of the coal fire pull fresh air into the house, instead moisture was delivered on tap. Much heat is wasted fitting radiators to an outside walls to fight the cold. It only further concentrates the convection of moisture into the bay. Moved to an internal wall the ‘radiator’ can convect a more even temperature gradient. Central heating shrinks timber lathe, cracking the plaster ceiling. Repair with ‘Artex’ textured decorative finish, unskilled and product lead. Like other modern plaster finishes Artex is reasonably vapour permeable however the substrate preparation, Polyvinyl acetate, ‘PVA’ or Artex sealer that makes it easier to apply is not. A vapour control layer has been applied where least wanted. Black mould grows on pure clean distilled water which will condensed on cold vapour ‘impermeable’ surfaces. Double glazing reduces moisture drop out on the windows concentrating it under the window. The Victorian Lime plaster is packed full of impurities, industrial waste such as clinker which reducing it moisture buffering hygroscopic capacity. Under the window the plaster is now having to buffer moisture drop out on behalf of the whole room and finally becomes saturated with condensation. Repaired with filler, vinyl paint and ‘damp stopper’ has been applied further exacerbating the problem. Downstairs, the proposed cement rendering of the ‘rising damp’ is put on hold, deposit returned until the ‘roof leak’ is repaired. Simple diagnosis confirms it wasn’t trying to get in, it couldn’t get out.

“No it’s definitely a leak, it’s running down the walls.” Condensation

With other cold spots now vapour impermeable the addition of loft insulation left the bay to get colder. Whilst putting right the damaged plaster in the bay it’s as well to attend to the whole front wall. Lime plaster should never be painted especially with vinyl, it’s a barrier to the walls ability to buffer peaks of humidity. Moisture vapour passes through, then joins with other vapour droplets and increasing in size, trapping them behind the vinyl paint. Wallpaper should be applied, it’s much easier to removed. Traditionally components such as quion stones and window surround are carved from ‘open’ stone such as oolitic limestone, Bathstone. The carved ‘decorative’ detailing increased surface area to facilitates evapotranspiration. Increased demand for building components lead to tradition knowledge lead craft techniques being scaled up into manufactured products at lower cost. These late Victorian quoin stones and window surrounds are a ‘façade’ Cast to look like the original details they are made from clay and may have been strengthen with cement making then ‘closed’ stone. Cast and extruded clay components are hollow making them cold further increasing the risk of condensation risk.

Note the step down in the terrace exposing more of the corner to greater heat lose especially in winter when this part of the building sees no sunshine. Inside and the step down in the terrace combined with the hollow quion stones has made the corner cold. Like under the window the low capacity plaster became saturated with condensation. Cement render, was applied to stop moisture getting in when it couldn’t get out. The previous elderly resident was eligible for freely fitted loft insulation. With easy win government money up for grabs the condensation was left to focus in the difficult to tackle remaining cold spots causing timber decay in the bay. When buildings façades emulates the work of the master craftsmen the underlying purpose of architectural detailing gets lost. Instead of protecting the timber window from condensation and degradation with a quick response, high capacity ‘open’ stone such as oolitic limestone, these cast clay cast component make cold spots right where you don’t want them. The damp under the window began with failures in the original design, the original plaster was adulterated making it ‘closed’, building alteration and people exacerbate the problem. Using an axe cleft timber ‘Dochens’ from well seasoned temperate forest timber. Adjust with a wide chisel to accentuate  the twist. Do not use tropical timber it’s hygroscopic in the wrong direction. Using a masonry drill rake out a gap in the mortar for the Dochen and hammer into place with a heavy lump hammer. The skirting boards are reinstated onto new timber Dochens marking out the position of the new internal surface. Dochen cover the wall in a diamond pattern every three courses of brick. A laser level is ideal for indicating where the new surface will be and where to trim the dochens. This can be done with a spirit level or plumb-bob. Hemp Lime or Hemcrete should not be mixed in a concrete mixer. in a ‘tombola’ keeps the caustic dust contained under the lid, a wheelie bin will do. Hemp shiv and lime binder are first mixed dry, then the water is gradually added. The tendency is to add additional water as this intuitively feels more sticky but it is not necessary, if it’s glossy it’s saturated. The first mix is measures to ensure it fills the appropriate volume at the correct density. There is a tendency to pack it in to tight which reduces the thermal resistance and would result in running short of materials to complete the wall. Connecting and engaging with the wall whatever the shape filling every nook and cranny. This allows the original wall and the Hemp Lime to relate to each other unlike solid wall insulation boards which leave gaps where problems will occur.

The problematic hollow clay detailing blocks are filled with Hemp and Lime. Flat, true and level is so much easier to achieve by casting and less skilled than cutting to fit and mechanically fixing, where gaps cause problems. At the very top instead of fixing shuttering it is quicker to hold a large plastering float in place with one hand while packing the Hemp and Lime in with the other.

Working as a team momentum builds, problems are solved, knowledge is exchanged and with understanding comes cooperation. What we learn becomes taught. The section on the party wall where cement has been removed is cast minimally at 25mm thick to fit in with the existing finish rather than removing the whole section. It was done entirely using a ‘float’ rather than shuttering and a little artistic licence has brought it out thicker in the top right hand corner where it is needed most. The bay ceiling is pragmatically insulated with ridged foam board. This allows a thinner but warmer bay ceiling not under the loft insulation. Plywood ensures the ridged foam insulation sandwich is held tight and the curtains can be secured anywhere. Over-boarded with plasterboard and skimmed with Gypsum Multi Finish an introduction to vernacular gypsum plastering. No PVA is applied in preparation. The wall was easy to plaster, having been cast flat and having the open surface to accept the plaster. A fine fibreglass mesh is added to the base coat, this acts as a trowel guide, ensuring the surface remains flat and ready to receive the top coat. The original window board are widened. The wood work is pinned back in place with prior to the top coat of plaster being applied. Baumit KG 30 top coat. Lime plaster has a much longer working time to get it smooth.

Hemp and Lime ‘internal wall insulation’ has repaired the damage caused to the walls. It has also reduce the risk of damp by replacing the internal vapour impermeable cold surface with a hygroscopic insulated reservoir that buffers peaks in humidity without letting the moisture condense. Hydrothermal passive heat recovery.

Over a century of bad practice put right in a couple of weekend. No specialised equipment just low cost knowledge lead renovation.